This show, planned to tour and to be adapted for Europe in 2016, is an immersion into the world of the dead and the living, and also on the process between the two. Death itself, its expansion, depth and magnificence is considered here as a study and compilation of different perspectives (or religions), namely Buddhist, Christian and Sufi (…). The performance is divided into three acts: Life, the Between and the Death of a Dancer. 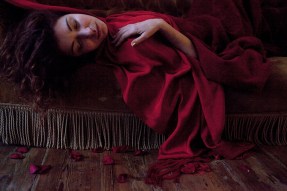